A white ship floats in the middle of the Pacific Ocean nearly 100 miles off the coast of Chile, north of Antofagasta. Its keel sits around 26,473 feet above the ocean floor. Up here, the warm sunlight, the skin of the ocean, the best known, the color blue; down there, the eternally black masses of water, the immense pressure, the unfamiliar, the more hostile.

That formidable abyss known as the Atacama Trench or Chile-Perú Trench is the deepest point in the eastern Pacific Ocean. This intimidating, V-shaped vertical fissure runs parallel to the South American coast for over 3,600 miles, rivaling the geography of Mars in its grandeur.

Straight out of a Jules Verne novel, this is a realm of bizarre topography and outlandish creatures, where the water pressure compresses and can implode anything not born there. This is why, so far, the Atacama Trench has been gingerly explored by robots, but never visited by fragile humans. This morning, however, that is about to change.

An equally white submersible dangles from a crane at the stern of the boat. It looks like an enormous pillow with the sides smashed in. The protective coating is actually a synthetic foam consisting of minute, empty glass spheres joined by a resin. A perfectly-machined sphere of the purest titanium nests inside the outer shell; the dark gray walls bristle with instrument panels, and three small round windows provide a glimpse of the sea below. It is barely large enough for two seated passengers.

Bearing the uncommon name Limiting Factor, this vessel represents one of the most amazing revolutions in submarine technology; it is a submersible as unique as a Martian rover. It was designed by Triton Submarines of Florida at the request of the Caladan Oceanic company. The owner and leader of the expedition is Texas businessman Victor Vescovo, who has been a mountain climber, aircraft and submarine pilot, explorer, and patron of the science of the depths, in that order.

The entire expedition functions under the eagle eyes of specialized personnel from EYOS Expeditions, a company equipped to lead expeditionists and millionaires on exotic voyages to the ends of the earth.

Once the submersible is in the water, Vescovo activates a switch and an empty chamber begins to fill with sea water, pushing the vehicle downwards: from here on, it should sink like a stone until it almost touches bottom at 26,473 feet. The descent will take three and a half hours, followed by another three hours of exploring the sea floor. The three hour return trip makes for a voyage of nearly ten hours.

For the stomach, a sandwich. For Vescovo’s soul, intelligent conversation with his partner and the satisfaction of achievement: This will be the seventieth dive he has made in the course of his exploration, more than consecrating him as the “deepest” man in the world. This will also be part of a long effort to dive the twelve deepest trenches of the earth’s oceans, which contain nearly fifty of these canyons. Atacama promises to be one of the most interesting. 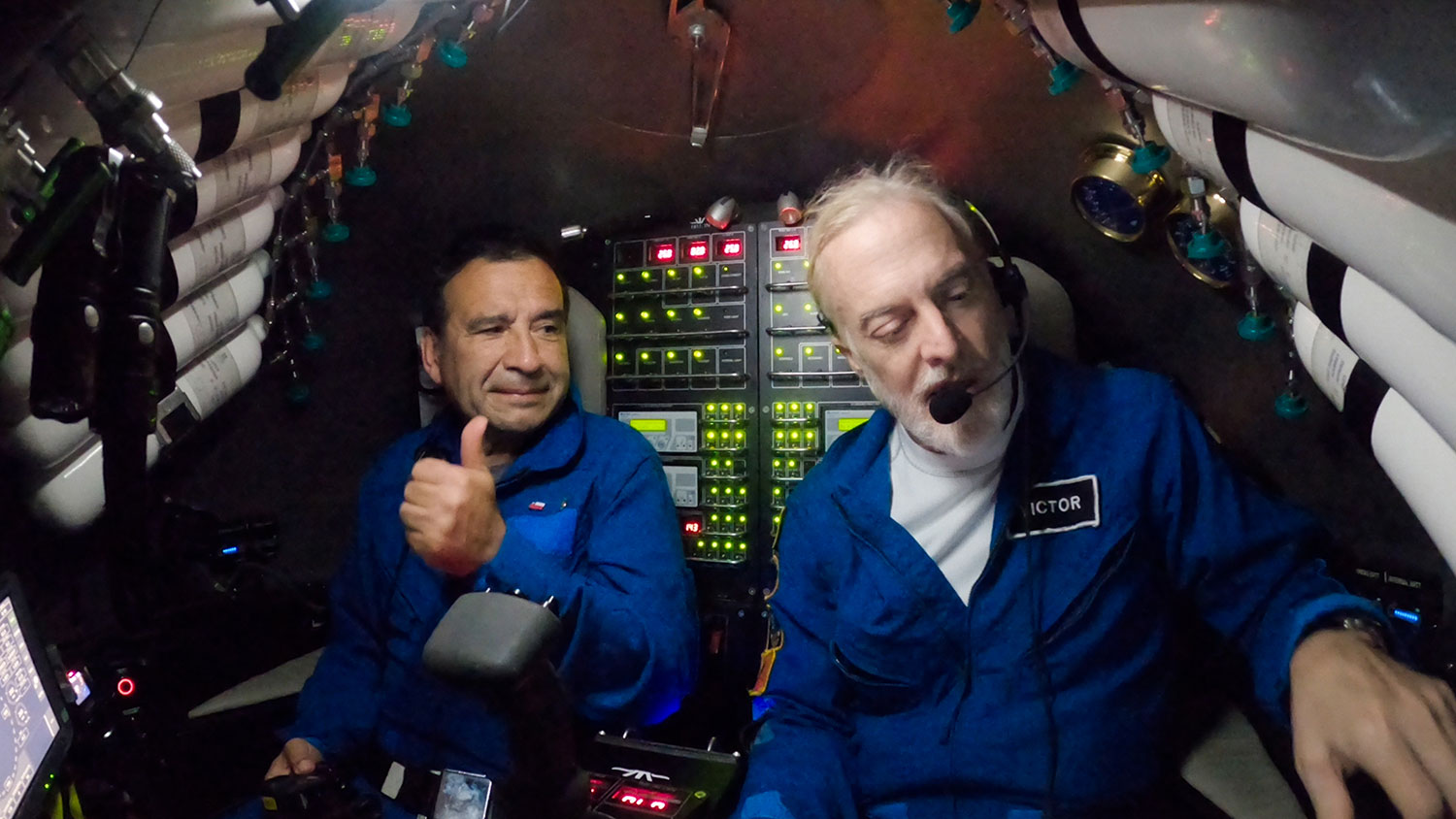 The passenger seat is occupied by microbiologist Osvaldo Ulloa, director of the Millennium Institute of Oceanography, which is affiliated with the Universidad de Concepción in Chile. He wrestles with a powerful wave of emotions. He and his colleague, Rubén Escribano, spent years studying the Atacama Trench. On previous expeditions with non-crewed modules launched from the surface, they collected samples of water and the dissolved DNA of organisms living in this underworld. In their conversations, the two scientists imagined time and time again how it would feel to glide over this alien landscape as yet unseen by human eyes, but they couldn’t really imagine visiting this watery Hades in person.

Now, invited by Vescovo, Ulloa is here, observing how the ocean embraces the submersible as if it were another drop of water. He watches the cobalt blue of the upper layers shifting to a faint gray and finally, giving way to utter blackness. The descent feels gentle, silent except for the murmur of the small electric engines or Vescovo’s occasional callouts to the mother ship. “Passing 19,685 feet. Life support good.”

At 19,685 feet… This is the gateway to the so-called Hadal Zone. From here down is the realm of marine trenches, the forgotten cellars of the planet. The Atacama Trench lies at a maximum depth of more than 26,000 feet, while the Challenger Deep point in the Mariana Trench plunges further into the earth’s crust to 35,876 feet. These ravines are formed when the rocky plates under seas and continents —shifting at a snail’s pace— clash with each other or slide under one another. In other words, the Earth is always swallowing its crust, like a snake swallowing its own tail.

Forty minutes later, a fine cloud of yellow silt announces the proximity of the sea bed. Vescovo toggles a joystick to one side and hovers a few inches above the sea floor. The lights outline a brutally austere but inconceivably sublime landscape. Some hundreds of yards further on, they come across a rocky terrain of deep crevices, and a nearly vertical wall rising into infinity: they are now in front of the “hinge,” where the sea bed slides under South America, pushing the Andes ever higher, and producing the earthquakes and tsunamis that wreak so much havoc in this region.

Exotic hadal creatures begin to appear: sea cucumbers known as holothurians that have been seen in other trenches, but are different here, with numerous short feet extending from their gelatinous tubular bodies. Red amphipod crustaceans similar to crayfish act like the piranhas of the underworld, devouring in minutes the bait set for them on the sea floor. Strange jellyfish never before seen at these depths sail by. Creatures float, crawl, or burrow in the sea floor, leaving networks of trails that look like an alien city from above. Unlike in other trenches, there is an abundance of life, which bodes well for hadal studies in the Atacama Trench.

Who said there is no life in the deep? There certainly is, but contrary to our imaginings, there are no huge monsters: not even the giant squid can exist at the bottom of a trench, although fish have been found at some 23,000 feet. The water exerts a crushing pressure equivalent to dozens of 747 aircraft squashing every half-inch of an organism’s body.

There are, however, a multitude of tiny beings that operate according to their own laws in the heat of the Earth’s inner magma; they obtain food and energy directly from the minerals at the bottom of the ocean. In this unexplored realm, life is governed more by pressure than by temperature. Each one of these organisms’ cells contains valuable information about the evolution of life on our planet.

The allotted time at the bottom comes to an end, with Ulloa and Vescovo not yet emotionally or intellectually prepared to depart. But the door to scientific exploration has now been thrown wide open, thanks to the revolutionary technology of the submersible designed by Triton and the drive of people like Vescovo. Now it is safe, albeit expensive, to visit ocean trenches as often as we wish. It is indeed essential to do so, since as Victor Vescovo likes to say, “in profundo cognitio” (“there is knowledge in the deep”).

Following in the Footsteps of Martin Luther King Jr.